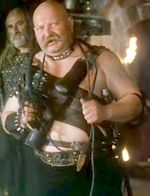 Bogdan Michalak as Fifteen in The Hexer

Fifteen used to be one of Abergard's subjects in the Angren Free Company, and it's from those days he has his nickname. He joined Renfri's band, probably at the same time as Nohorn.

Fifteen in the graphic novels

Played by Bogdan Michalak in The Hexer.