Order of the Flaming Rose 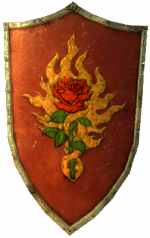 The Order of the Flaming Rose is a militant religious order featured in The Witcher game series. Built upon the deteriorating Order of the White Rose, it does not appear in Andrzej Sapkowski's books.

By the events of the Hearts of Stone expansion, King Radovid has disbanded the Order and driven its members into hiding. Having resorted to banditry and drug manufacturing, "fallen" knights from the Order feature across the landscape east of Gustfields.[1]

The Order once again appears. Geralt finds them camped outside of Loc Muinne, maintaining the peace during the negotiations. Having been invited by King Radovid, the Order also takes part in "witch hunt" that ensues.

Importing the Order's Path from the first game[edit | edit source]

With Siegfried of Denesle as Grand Master, the Order undergoes crucial reforms in their foundations and is now under Redanian protection. Radovid promises the Order land close to Roggeveen, where Siegfried wishes to build a stronghold - "Barienmurg". 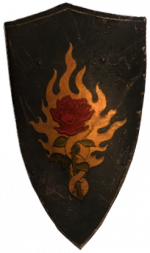 The Order's mission is to protect Temerian society in The Witcher. They demand no payment for their services, raising the question of where their funding comes from. In Vizima they have taken over the responsibilities formerly held by the Special Forces. They actively promote the cult of the Eternal Fire.

Grand Master Jacques de Aldersberg is the organisation's founder and leader, a man of whom people know very little prior to his involvement with the Order.