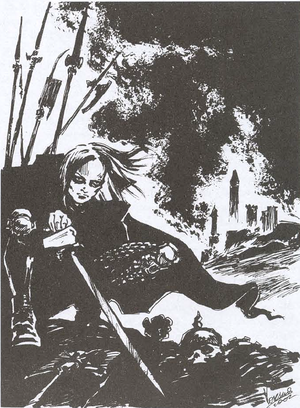 Falka was the oldest daughter of Redania's King Vridank and his first wife, Beatrix of Kovir. Three years after the wedding of King Goidemar of Temeria and Riannon, Falka became the leader of a rebellion that grew notorious. During the rebellion, Falka apparently killed her father, two half-brothers - Heltmult and Denhard - and her father's second wife - queen Cerro. She also imprisoned the then-pregnant Riannon.

While in prison, Riannon gave birth to a set of twins and then went mad. Around the same time, Falka also gave birth, leaving the care of her newborn in the hands of the deranged prisoner. Not long after, the rebellion was quelled and Falka was tried and condemned to death by burning at the stake; henceforth, the people of Temeria and Redania have thrown a figure representing Falka on the bonfires during Saovine celebrations. According to the legend, Falka cursed all the people present, and promised that they and their progeny would suffer at the hands of a child bearing her blood.

Later information dug up by Fenn would suggest that Fiona was actually Falka's daughter, not Adela - implying that it is possible that Falka was one of Ciri's ancestors according to Ithlinne's Prophecy. And also that she carried elder blood in her veins.

The book The History of the World by Roderick de Novembre tells the tale of Falka's fate. Sharp-eyed players can also spot her name now and again in the game in the conversations one can overhear.