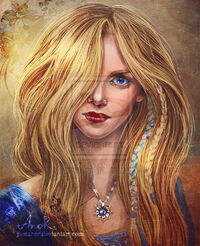 Essi Daven is a talented bard (also known as a "trobairitz") and also the friend and professional rival of Dandelion. The latter has always treated her like a younger sister. She is quite possibly the only woman Dandelion had not actively tried to bed. She appears in "A Little Sacrifice", a short story in the Sword of Destiny collection by Andrzej Sapkowski.

Her nickname is "Little Eye" (Polish: Oczko), but this is likely used jokingly as her eyes are described as giving meaning to the phrase "eyes like stars in the sky" and of a magnificent, riveting, dark blue. One eye is constantly hidden by unruly tresses. She wore a silver flower-shaped pendant with a blue pearl.

Her ballads are collected in "The Blue Pearl". Some of the ballads were so moving that Ciri shed tears while reading them.

After a brief romance with Geralt, she parted ways with her friends, Geralt and Dandelion. That was the last time she and Geralt were together. Four years later she met her death in Vizima due to smallpox. Dandelion himself took her body from a pile of burned corpses and gave her a proper burial in a peaceful place. This is related at the end of "A Bit of Dedication", when the narrator tells us the true history behind Dandelion's new ballad: it was never performed.

The journal entry for Hounds of the Wild Hunt contains a quote from Essi Daven, but there, her nickname is listed as "Blackjack".