Errdil is an elf living in Rinde. Prior to the short story The Last Wish, he'd moved there with his quiet, taciturn wife and his cousin Chireadan. He bought an inn, intending to renovate it. Lucky for him, he had the place well insured before it was destroyed during the fight between Geralt, Yennefer and a Djinn.

He recognizes Dandelion, claiming he saw the bard, once, singing in the court of king Ethain of Cidaris. 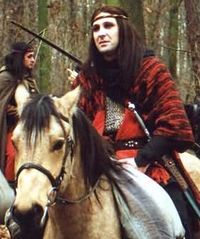 It's uncertain whether these elves share anything but a name.