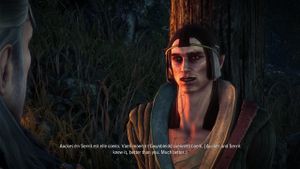 In the Kaedweni camp, Geralt notices an elven prisoner being closely guarded and asks if he can question him. The guards initially refuse the witcher's request saying that they don't know him nor do they trust him.

Later, after having gained the trust of the Kaedweni soldiers, Geralt is allowed to question the prisoner. At first the elf is reluctant, but Geralt persists and finally gets to the elf to talk to him in Elder Speech so that the guards will not be able to understand what is being said.