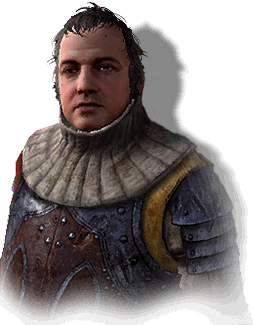 Edwin Leistham is a secondary character in The Witcher 2: Assassins of Kings. He presents himself as second to Letande Avet when Geralt challenges him to a 2-on-2 duel with Sven.

Knightly eccentricities such as speaking in rhymes or offering ladies feathers from the helmets of one's vanquished foes are of classical origin. Edwin Leistham earned the moniker of "Petal" by putting flower petals into the mouths of slain enemies. These eccentricities, however, worked on the females – at the sight of such knights, maidens from Buina to Yaruga ran towards them so fast that, if they were to be laden with bales of hay, the hey would immediately catch fire.

As a result of this epic clash Edwin Leistham fell to the blood-soaked ground and there was scarcely a breath in him as he was carried from the field. That's evidence, dear readers, that if one's substance does not equal one's style, it is better to devote more time to training than to picking flowers.