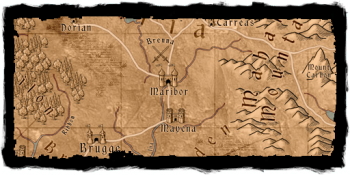 The Duchy of Maribor is a fiefdom of Temeria that lies south of its capital Vizima. It is ruled by Duke/Prince Jurkast. The kingdom's second largest city, Maribor, is situated here. During the 9th century, the rulers of Maribor and Ellander engaged in a conflict known as the War of Daggers from which Maribor came as winner and Mariborian branch of Dezmod dynasty become royal.

Wiedźmin: Gra Wyobraźni role-playing game attributes red and silver lilies to Maribor, while Time of Contempt describes hardly visible Mariborian flag as bicolour of white and black. The emblems above are our attempt to honour both descriptions.