Dopplers, also called vexlings, shifters, mimics, doubles, imitators or pavrats, are shapeshifters who can take the form of anyone or any beast they have encountered, provided it has a similar body weight. Additionally, they take on not only the characteristics associated with the form they have "borrowed", but also their clothing, equipment and even abilities. Their abilities have some limitations however: shapeshift is possible only if they do not touch the silver, and any item created from their body would change into torn out flesh in case of losing contact with the rest of doppler. In natural form, they have yellow eyes a somehow bloated and grotesque humanoid shape and rather long limbs, noses and tongues.

Before the First Landing dopplers used to inhabit a plateau and forests near the Pontar Delta. They spent time taking forms of wolves and other animals and join their packs or herds. During winters, they usually hibernated in windthrows. 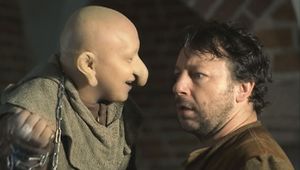 All of that changed dramatically when the human settlers arrived, hunting dopplers like rabid dogs. Only a few survived and most of those began to move to newly-built Novigrad to live as humans and members of other more accepted races. Even that wasn't easy however – the mistrust of vexlings grew to such levels that some fanatical priests captured the hapless creatures and killed them in the most excruciating way: they would be encased in clay vessels and baked until they burst.

Dopplers appear in only two of the Witcher stories: the short story "Eternal Flame" in Sword of Destiny and "Coś się kończy, coś się zaczyna" ("Something ends, something begins") in the identically named collection.

One of the most extraordinary races of the Continent, intelligent creatures who evolutionally mastered the art of mimicry. They can change into any being who they know and who do not differ from their size. They can copy so precisely so apart from appearance they acquire physical features (like voice), skills, mindset and characteristic behaviors. To all this they don't need any previous insightful observation, they do it instinctively. They also can change fragments of their bodies into clothes or equipment, like a sword or lute. The changes can be stopped by silver, for example silver neck-chain.

In natural form they look quite hideously – like bald, long-nosed and yellow-eyed midgets; somewhat a figurines molded of dough.

The unusual skills of vexlings from always have been arousing anxiety or even fear among humans. Mimics were hunted mercilessly, in fear that their capabilities would be used for evil purposes, like manipulating the human society. Such concerns were mostly unreasonable, because dopplers are exceptionally kind and gentle beings, for whom the ability of metamorphosis serves as compensation for lack of aggression, fangs and claws.

Dopplers are among the creatures that appear in The Witcher 3.

Your package? Your brother picked it up. You know, you two're damn near identical... Hey! Where you running off to?!
— Hanne Kluger, postmaster

Dopplers, also known as vexlings or changelings, are beings able to take on the form of any humanoid or animal they please. This transformation is no mere illusion able to be shattered with a simple spell, but an authentic and complete metamorphosis. This means no protective amulets or witcher medallions will signal a doppler's presence – they emanate the same aura as the being whose form they have assumed. This, combined with their incredible intellect and cunning, would make dopplers supreme assassins or thieves – had not nature endowed them with generous and timid spirits which make them avoid the shedding of blood at all costs.

The doppler were among the creatures used in the cancelled module Masquerade adventure developed by the Ifrit (modding team), a fan-based modding group.