"Dolina Kwiatów" ("The Valley of Flowers") is the seventh episode of The Hexer TV series. It is based on the short stories "Eternal Flame" and "The Edge of the World" by Andrzej Sapkowski.

The first part of the episode takes place in Novigrad, where Geralt and Dandelion encounter a doppler impersonating Dainty Biberveldt, a halfling merchant. Then they leave Novigrad and head for Dol Blathanna.

After finding no real work for a witcher in Upper Posada, Geralt rides down a road with Dandelion. Nettly, a local farmer, catches up with them, saying he has a job; they go to Lower Posada to discuss.

The village elder, Dhun, tells of a 'devil' whose mischief has turned from frolicking to foul, but under no circumstances should the creature be killed. Despite Dandelion's claims that there are no devils, Geralt agrees to take a look and see what he can do.

Out in the fields, near the hemp and the hops, Geralt and Dandelion the 'devil'. Dandelion and the bleating 'devil' exchange a couple of words which only serve to provoke the latter; he takes aim and starts throwing iron balls at the witcher and his friend, and they flee.

Back in the village, Geralt confronts Dhun and Nettly, and meets the community's old wise woman and Lille. After some discussion, an ancient book is brought forth, and the old woman 'reads' appointed entries from it. This way, the witcher and the bard learn that the devil is, in fact, a sylvan, and the villagers tried to outsmart him as per the book's suggestion. The old woman and Lille leave, taking the book with them; Geralt converses with the men some more.

Later, back in the fields, Geralt meets the sylvan anew; the negotiations end in a tussle among the hemp. The sylvan flees into the hops, followed by Geralt. But there's a twist in the story, and the witcher's knocked unconscious.

He stirs, tied up, to the sounds of people talking in the Old Language; he recognizes one of the voices as belonging to the 'devil', and learns his name is Torque. Next to the witcher, Dandelion's similarly bound.

Their captors, elves, notice their captives have awakened, and Toruviel approaches them, aggressive. She breaks Dandelion's lute, Geralt headbutts her, breaking her nose, and the elves draw blades. They're stopped by Filavandrel. The relief doesn't last long, though, for the bard and the witcher are tied to a pine tree with belts. Geralt tries to talk some sense into the elves' heads, but it's of no use. The elves aim their bows.

It's then that the Queen of the Fields enters. The elves halt, lower their weapons, and bow. Filavandrel pleads with her, but she doesn't say a word. Meanwhile, Torque's cutting Geralt and Dandelion free.

After a moment, the elves get up, silent, saddle their horses and start to leave. Filavandrel bids Geralt farewell, Toruviel gives Dandelion a new lute, and they part ways. 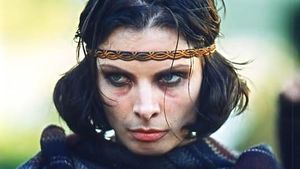