Dice poker in The Witcher 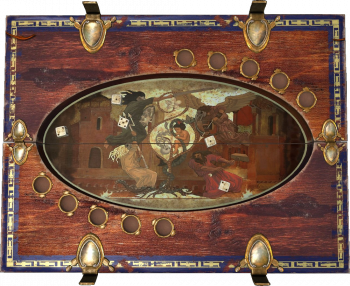 Dice poker is an addictive game played throughout the world of The Witcher, and it is very popular in Temeria. If you are good enough, it is a great way of making money.

After finding a starter box of dice, Geralt is given the quest A Game of Dice. Opponents can be found far and wide as it seems mercenaries took it with them to the farthest reaches of the kingdoms as they scattered after the war. A clever witcher could finance many little extras with the proceeds of a few games. 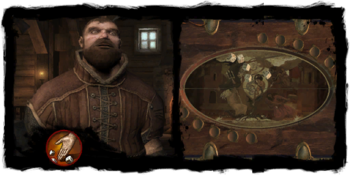 From the lowest to the highest:

Nothing — five mismatched dice forming no sequence longer than four.

Full House — Pair of one value and Three-of-a-Kind of another.

Each game has two rounds and each round has two rolls. Geralt always starts. Between rounds each player who can afford to may raise the bet once. After Geralt makes this decision, the opponent can surrender, accept or raise (re-raise); surrendering is effectively forfeiting the round. If (after both re-roll decisions) both hands match, the highest face-value prevails: e.g. if you have a Pair of 3s and your opponent has a Pair of 4s, you lose. 'Extra' dice (in the case of Pairs or Three-/Four-of-a-Kind) are only considered if matching hands are identical: e.g. if each player has four 6s, your fifth die is a 3 and your opponent's is a 1, you win. If both players end with all five dice matching, it's a draw; this adds another chance to raise the stakes and re-roll, and though rare, can happen more than once per game, dragging it out until one hand exceeds the other.

Start your first match with the lowest ante and bet conservatively. If you win, quit here. Otherwise, up the ante and play again, betting more aggressively. Repeat once more if needed. If you still haven't won after three tries, you need to study the odds! By this method, assuming you can win half your matches, you will usually come away with at least a small monetary gain. The chance of losing three matches in a row is 12.5% if you are evenly matched.

If your hand is worse than your opponent's, call. If it is much worse and the opponent raises, fold unless it's the third hand; by that time the pot is usually rich enough that it's worth your while to call unless your opponent has an unbeatable hand. If your hand is better than the opponent's, raise. If it's much better, raise the limit... it's always possible to see a good hand fall to a better one, but usually you will win if you're starting with a straight or better, so you should make your opponent pay for his chance to beat you. A smart opponent will often fold to you if you make him pay too much to stay in with his bad hand.

Below are the odds for improving your hand:

Rolling two dice: You have three of a kind and end up with:

Rolling one die: You have four of a kind, in which case your game is won, or you are rolling for a straight (16.7%) or trying to improve two pairs (33.3%). If you instead throw away the lower of your two pairs and roll three dice, your odds are worse.