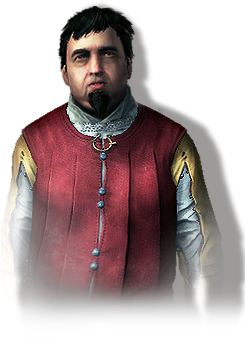 Count Linus Maravel is a secondary character in The Witcher 2: Assassins of Kings.

Count Linus Maravel belonged to that singular category of individuals who can strike a bargain with anyone, who are so pragmatic in their thinking that they can persuade, at least in part, even those most strongly opposed to their viewpoint. Maravel thoroughly enjoyed the game of Temerian politics. He was an active and reputedly highly effective player, in addition to being one of the country's most influential aristocrats. Much like Baron Kimbolt, he had grand ambitions, yet he held them in check and was much more ingenious and precise in pursuing his plans.

One of Maravel's more daring schemes involved kidnapping Foltest's children as they traveled to Loc Muinne in a convoy. I should add that the count had reached an agreement with the Nilfgaardians, promising to deliver Boussy and Anais to the Black Ones in exchange for their backing his claim to the Temerian throne. Though he wanted Temeria to be strong, he had committed treason.

Having completed his investigation, Geralt concluded that Maravel was guilty of Boussy's death. The witcher gave the rogue up to John Natalis.

Although Geralt suspected that Maravel had committed many a despicable act, he decided that the count would not answer for Boussy's disappearance. Thus the nobleman remained an innocent man in John Natalis' eyes.