Contract: Patrol Gone Missing is one of the quests in The Witcher 3: Wild Hunt. In this contract, the Nilfgaardian quartermaster Tavar Eggebracht tasks Geralt with finding a scout party that did not return to camp for unknown reasons.

Those who stray off the beaten tracks in the bogs of Velen rarely live to amend their error. Even the Nilfgaardian soldiers stationed in the Army Group 'Center' camp would at times disappear in the marshes without a trace. After yet another patrol failed to return, the quartermaster of the camp posted a call for some brave soul to search them out and bring them back, or, barring that, at least determine their fate.

From footprint to muddled footprint, from one broken branch to another, Geralt retraced what had happened in the woods outside the Nilfgaardian camp. Oblivious to the danger, the Nilfgaardian soldiers had strayed into a wyvern's hunting grounds. Their thick plate did not stop the ferocious beast from tearing them to shreds.

Further investigation revealed this already rather gloomy story had an even gloomier twist. They fallen Nilfgaardians had not been wandering the Velen woods on a run-of-the-mill patrol - they had gone there to kill Redanian prisoners of war and hide their bodies. What they did not realize was that the monsters of the swamp could sense the stench of rotting corpses even through thick layers of soil - and never pass up the chance to feed on the dead.

The Nilfgaardian quartermaster brushed off Geralt's accusations of war crimes with a shrug of his shoulders. The witcher was disgusted by this response, but felt outbursts of indignation would not do much to change the course of the conflict, whereas a purse of gold would do a great deal to change his material circumstances. He thus took his pay and marched straight out of camp. 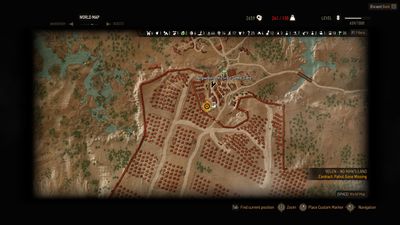