The Coccacidium is an unusually vicious and large archespore in the Swamp. It is particularly nasty if Geralt is not very experienced. Vincent Meis will pay handsomely for its head.

The coccacidium usually spawns in a few places preferentially, but the longer you manage to avoid it, the more likely it is to spawn, so after a while it really begins to feel like you are being chased. 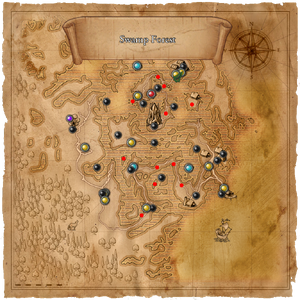