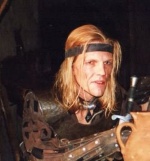 Grzegorz Emanuel as Civril in The Hexer

Civril is a brigand and a professional murderer with a sharp tongue. According to rumours, he was at Tridam. He is part of Renfri's band. He features in the short story "The Lesser Evil".

in the graphic novels

He was portrayed by Grzegorz Emanuel in The Hexer, evidently the dark hair was not a consideration for the film.