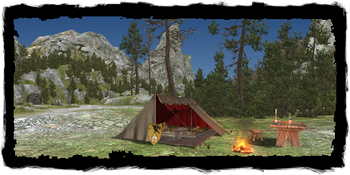 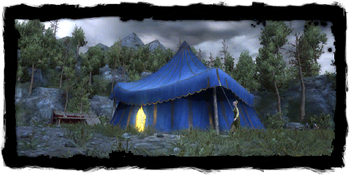 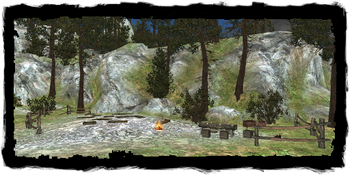 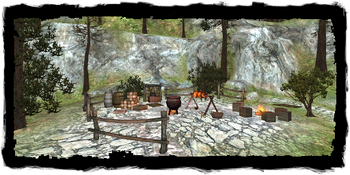 The camp, located in Kaer Morhen valley, is where Geralt first meets Merwin Ademeyn and Sabrina Glevissig in "The Price of Neutrality" module. The camp itself includes Merwin's lean-to, Sabrina's much more luxurious tent and two smaller areas where the mercenaries have set up their accommodations. It is also surrounded by packs of particularly vicious wolves.

People at the camp include:

The nobly born Merwin Ademeyn and his entourage have made camp by the river ford near Kaer Morhen. The sorceress Sabrina Glevissig is ostensibly a member of the retinue, but her tent, located at the center of the camp alongside the aristocrat's, suggests an altogether different status. The camp is also home to mercenaries whose services Ademeyn retains for this mission. They sleep out in the open by campfires, taking turns guarding the campsite and the boats in which they traveled to the witchers' fortress. Thus far, Ademeyn and his group have endured several attacks by aggressive wolf packs that have infested the area.