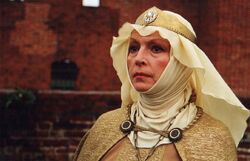 Calanthe in The Hexer TV series, portrayed by Ewa Wiśniewska

Calanthe Fiona Riannon of Cintra, known also as "Ard Rhena" (in Elder Speech meaning "High Queen"), the "Lioness of Cintra", was a queen of Cintra, the mother of Pavetta and grandmother of Ciri. Her nephew, Crach an Craite called her "Modron". She was known for her bravery and beauty.

Calanthe was the only child of king Dagorad of Cintra and queen Adalia, known as Fay. Because only a man could inherit the throne of Cintra, she could only be the wife of a future king. She decided to marry Roegner, prince of Ebbing. Later she married Eist Tuirseach of Skellige.

During the Slaughter of Cintra, she killed herself rather than surrendering to the invaders by jumping from the walls of the city of Cintra during its siege, after being heavily wounded in battle with Nilfgaardian forces at the Battle of Marnadal.

Origins of the name[edit | edit source]

Calanthe is a widespread genus of terrestrial orchids (family Orchidaceae) with about 150 species.