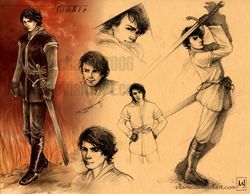 Cahir Mawr Dyffryn aep Ceallach, or simply Cahir, was an intelligence officer of the Nilfgaardian Empire who hailed from Vicovaro. He was the son of Ceallach and Mawr, the brother of Dheran, Aillil and grandnephew to Assire var Anahid. Cahir first appeared in Blood of Elves, though he is not named in the novel. It becomes clear in later novels that he is the black knight with the bird of prey wings on his helmet who invades Ciri's dreams.

When we first meet Cahir, he had recently been released after serving two years in prison from which he had only expected to escape via the gallows. Emperor Emhyr var Emreis had given him one more chance, adding that if he did not succeed, the executioner's axe still awaited him. Tasking Cahir with finding Ciri, he also stated that the chance of a pardon was extremely small and that of forgiveness, non-existent. The sentence was related to a mysterious incident that occurred two years earlier, but no further details are provided.

Later, he joined Geralt's party but not easily. Geralt nearly killed him on at least three occasions before finally grudgingly accepting him into his party. The first time was during the coup on Thanedd Island, then again later while Cahir was being transported as a prisoner in a coffin by hawkers.

Cahir loved Ciri. He confessed this to Geralt shortly before he died at the hands of Leo Bonhart in the assault on Stygga. He told Bonhart that he was the witcher but the seasoned killer was not frightened by this bluff and defeated the "Black Knight" in a few moves. Though he appeared to be an enemy from the outset, his sacrifice gave Ciri and Angoulême time to escape.