CD Projekt's The Witcher franchise is a series of games and comics created by or based on a license from CD Projekt RED, the makers of The Witcher computer game. Unlike previous adaptations of Andrzej Sapkowski's works, products in the franchise, aside from being mostly faithful to Sapkowki's books, are set in a common continuity. 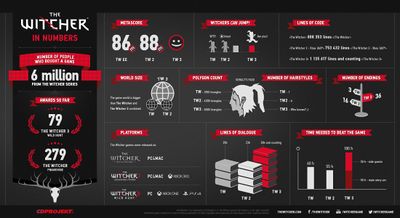 The Witcher in numbers

A computer role-playing game (RPG) based on Sapkowski's saga, it was released in Europe on October 26, and in North America on October 30, 2007. Advertised far more than its predecessor, and although CD Projekt RED's first game, it was well received by reviewers in both regions.

The game's plot is set five years after the end of The Lady of the Lake (the last chronological book of the saga series).

The sequel developed by CD Projekt RED, released in North America on May 17, 2011 for Microsoft Windows. Its plot is set a few months after the original game.

The third and final chapter of the main Witcher role-playing games, it was released on May 19, 2015. It is set six months after the events that transpire in The Witcher 2.

The 10th Anniversary of the Witcher series

The Witcher: Crimson Trail (Polish: Wiedźmin: Krwawy Szlak), also known as The Witcher Mobile is a mobile phone action game created developed by Breakpoint on the license from CD Projekt. It features Geralt in his youth as a promising young student, has just completed his training to become an elite monster slayer – a witcher.

The Witcher: Versus is a Flash-based multiplayer fighting browser game, developed for CD Projekt RED by one2tribe and launched in 2008. The game has you create a character from one of three classes and challenge other players to deadly battles. When you first sign up for Versus, which is tied into your thewitcher.com forum account if you have one, you choose from one of three character classes: Witcher, Sorceress and Frightener.

The Witcher Battle Arena' is a multiplayer online battle arena (MOBA) game in which players take control of well-known characters from The Witcher universe, created by CD Projekt RED and Fuero Games.

Geralt in Reasons of State

A series of comic books, not based on any of the novels or short stories but containing new adventures of Geralt, was released in 2011 by Egmont. It was written by Michał Gałek, illustrated by Arkadiusz Klimek and colorized by Łukasz Poller. Authorized by CD Projekt, the depiction of Geralt in the comic is based on The Witcher 2: Assassins of Kings video game. It is not related to any of the previous comics. Only one, two-part story was published:

New series of comic books, written by Paul Tobin and illustrated by Joe Querio began their release in March 2014. Like the Egmont comic, it is also based on the video game series and authorized by CD Projekt. While the first storyline, House of Glass, is an original story, the second one, Fox Children, is an adaptation of one of the chapters of Andrzej Sapkowski's Season of Storms novel.

A planned add-on for The Witcher that was in development by roXidy, it was cancelled in August, 2008.

A planned add-on for The Witcher, it was in development by Ossian Studios but cancelled in August, 2008.

The Witcher: Rise of the White Wolf[edit | edit source]

A planned console version of The Witcher computer game, featuring a redesigned combat system and engine. It was developed in cooperation with Widescreen Games but cancelled in 2009.