This picturesque little village's beauty makes it a frequent subject of works by bards and poets. The best-known piece whose action is set in Brunwich is "The Betrothing," a farce penned by Stanislas Islas. The reputation thus gained has made it a popular destination for bohemians from Oxenfurt, who escape here during the hottest months to pass the time with contests for the most beautiful feathered cap and hunts for a golden horn held at night in the nearby woods. 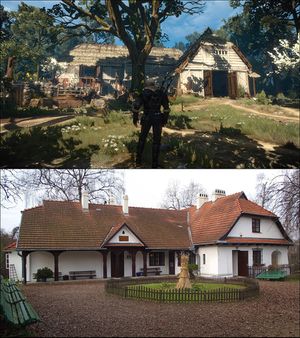 The village and a wedding in it form the grand Easter egg referencing to 1901 Polish drama Wesele (The Wedding) by Stanisław Wyspiański, which was based on real-life wedding of Wyspiański's friend Lucjan Rydel, member of Polish inteligencja, with Jadwiga Mikołajczykówna, common peasant's daughter. Both the real wedding and the play's premiere were the important cultural events of early 1900s Kraków.