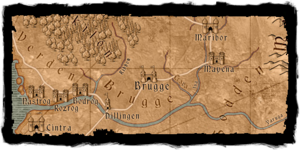 Brugge is a small kingdom on the Old Road. It is separated from its neighbours by the river Yaruga, its tributary, the Ribbon and the river Trava. Brugge is surrounded by Sodden in the east, Cintra in the south, Verden in the west and Brokilon in the north.

Brugge was originally an independent kingdom under the sovereignty of Venzlav, but now, Venzlav serves as a vassal to Foltest, monarch of Temeria. The coat of arms of Brugge is a silver anchor on a green field.

The Old Road runs through the country.

This flag was created by our resident heraldry and witcher expert Mboro, based on the description in the novels.

Brugge is also a real city in Belgium.