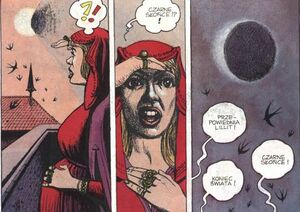 Black Sun in a reference to a certain eclipse, better known in the context of the Curse of the Black Sun, or Mania of Mad Eltibald. It was a prophecy made by the mage Eltibald that foretold the end of the human civilization in the hands of sixty girls born during or after a certain eclipse. It features in the short story The Lesser Evil where Geralt and the wizard Stregobor have differing opinions of it.

First the wizards hunted down the girls, killed them and performed autopsies when possible. After a while, when they admitted that recognizing the girls was hard, they opted to simply lock them up into towers, to isolate them. That plan suffered, because there was a brief fancy of saving beautiful girls from towers among princes. One after the other, though, the girls either perished or managed to flee their towers, and grew mighty enough for the wizards to leave them alone or get them in other ways.

It might be that the Curse became a self-fulfilling prophecy, for some of the girls who managed to flee the persecution later inflicted cruelty on others because of the treatment they had suffered.

In this premium module for The Witcher, Deidre is Eskel's surprise child, born under the Black Sun and prophesied to ruin the world and the sister of the nobleman who wants to make sure she will not have the crown. Sabrina wants to kill her as well to examine her body and discover the truth about the Black Sun - being The Witcher, Geralt has to choose with whom he sides.