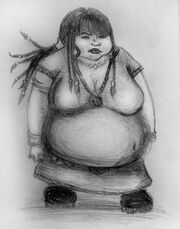 Bertha Maggot - former leader of the dwarven clan of Mahakam miners. She became a renegade after killing another female dwarf, claiming that the deceased stole her boyfriend. At present, she's living in the Temple Quarter and you can meet her at the "The Hairy Bear" in the evenings. She's considered to be a wrestling champion, and she can find no match among human boxers. She even spitefully calls them "weaklings". Bertha's weakness for baubles and gemstones is widely known - it is said that she would do almost anything for a 12-carat diamond.

Note: Bertha Maggot is a fake character created for the Easter egg hunt contest, which is now over. Congratulations to all finders!