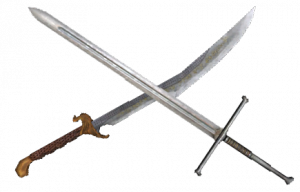 The Battle of Brenna was a famous battle of the Second Northern War. It was a turning point for the North, who had been (up until that point) losing rather badly.

For their initial incursion, Nilfgaard sent the heavily armed Alba Division. After some success on the battlefield, Alba had reached the centre of the Temerian army and was stuck there. The Nilfgaardian soldiers' heavy armour restricted their movements making them easy targets for the pikes and spears of the Temerians. Ultimately the Temerian infantry prevailed.

Menno Coehoorn responded to this attack by bringing in his own troops (the Deithwen cavalry and a heavy battalion, Ard Feainn) and assaulted the enemy lines above Golden Pond, where the troops from Brugge had made their stand. The troops from Brugge managed to fend off the Nilfgaardians for a while, but their morale was low and their weapons inferior. Fortunately the Free Company arrived with much needed help, and the enemy troops were stopped, but many men were lost on both sides.

Nevertheless, Nilfgaard was still close to breaking through to the front, so the Free Company and troops from Mahakam joined the fray and took on Ard Feainn, managing to push them back. Seeing this, Field Marshal Coehoorn sent in the elven "Vrihedd" brigade, to try and divide the Temerian and Redanian armies. Their hope was to break through to the front before before the dwarves and other reinforcements arrived to bolster the nordlings. They managed to do that, and the Nordling army panicked.

In response, King Foltest and John Natalis sent in Bronibor's and Blenckert's troops from Redania.

Field Marshal Coehoorn gathered his remaining troops (the Nauzicaa and 7th Daerlanian brigades) and attacked the location where the elves were. He didn't count on Bronibor's infantry fighting so bravely against a larger foe. On the left flank, Nilfgaard's army was in ruins, troops fighting at the centre front were losing to the Nordling armies. Nauzicaa was surrounded and destroyed and 7th Daerlanian brigade was defeated by the Free Company. The entire Nilfgaardian army was either defeated or surrounded. Menno Coehoorn was killed trying to escape from battle.

Northern Kingdoms (23,000 troops including an additional army from Mahakam)