Battle for the Bridge on the Yaruga 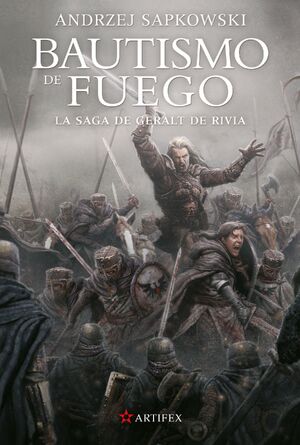 Battle for the Bridge on the Yaruga is one of the many battles during the second war with Nilfgaard. Queen Meve of Lyria and Rivia, after the loss of her army, led a guerrilla fight against the Nilfgaardians in Angren. The army rescued peasants who had been captured by Nilfgaard and forced to work, and destroyed some of Nilfgaard's battalions. When Lyria's troops significantly grew in strength, thanks to many volunteers and mercenaries from Mahakam, Meve decided to cross the Yaruga and move the fight to Sodden.

On the bridge, near Red Port, Meve left some troops to secure their retreat. Unfortunately they encountered guerrillas in great numbers and strength, and Nilfgaardian troops. The Nilfgaardians chased them mercilessly back to the Yaruga. The Lyrians made it to the ferry on the Yaruga river attempting to at least transport Meve to the other shore. Meanwhile, on the opposite shore, the Daerlan brigade which were fighting in Angren, made it to the ferry at the same time as Meve. Ironically, the ferry happened to be in the hands of Geralt of Rivia and his companions who were trying to reach the druids in Caed Dhu to get information on Ciri's whereabouts.

Geralt, Dandelion, Regis, Cahir and Milva had been trying to get to the north shore when they noticed that an armed group had mistaken them for the enemy and begun firing on them. Dandelion was able to discern from their banners that they were Lyrian troops, but the group was unable to communicate that they were not the enemy. They decided to return to the south shore when they saw the Nilfgaardian troops blocking that route and so were forced to flee using the ferry to navigate down the river avoiding both banks. Eventually they encountered the bridge near the Red Port.

Meve's troops were attacked by the Nilfgaardians on the far shore and fought bitterly to defend themselves. Thanks to Meve, who was fighting in the front lines and sustained a rather nasty facial wound, the troops were not broken and were retreating slowly towards the bridge.

The Nilfgaardians managed to get there first and attacked Lyria's infantry, shattering it and forcing them to retreat. Geralt and Cahir and the rest of the companions landed not on either shore, but on the bridge itself. Geralt and Cahir gathered the remaining (and fleeing) Lyrian infantry and led them in a counter-attack. They pushed Nilfgaard away from the bridge and recaptured it thus securing the Lyrian flank. Nilfgaard wanted to counter-attack but Meve came at them from the south. The Nilfgaardians, seeing the enemy's superiority, retreated from the Yaruga. Meve and her troops crossed the bridge and destroyed it and then fled from Nilfgaardian army. After the battle, Geralt was knighted by Meve and officially came to be known as Geralt "of Rivia".