Colonel Barclay Els was a dwarf and the commander in chief of the Mahakam Volunteer Army, a dwarven infantry unit. He distinguished himself on the battlefield at Brenna during the second war with Nilfgaard.

In The Witcher: Matters of Conscience[edit | edit source] 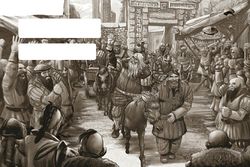 The Colonel arrives in Vergen

Barclay features in The Witcher: Matters of Conscience comic released with the Hearts of Stone expansion on October 13, 2015.

The Colonel arrived in Vergen after tragedy which happened during the first attempt to kill a chelonodrake which had been blocking the possibility to exploit the silver mine, when a bunch of dwarven warriors were accidentally burned alive by Saskia in her dragon form. His arrival meets with great enthusiasm of the gathered dwarves satisfied with incoming of the far-famed commander and resulted in an instant acclamation him as Elder of Vergen.

After taking a government, new Elder was disappointed with the lack of democracy caused by Saskia's high position. He also began efforts to conclude a peace treaty with the Nilfgaardian Empire, promising the neutrality during the eventual war.

Although he had showed a skeptical attitude toward an idea about chelonodrake hunt trying to prevent further victims, after coming of Geralt of Rivia he joined the tortohunters his own person. Killed during a hunt, he was ceremonially buried in Vergeni catacombs.

Intentions to make Vergen remain neutral were in vain. Saskia decided to conceal the Colonel's negotiations and tried to use his death to unite dwarves. Her plan however failed and Vergen was razed to the ground by Imperial forces in retaliation for persistence of the defenders.