And a Curse and Love and Betrayal 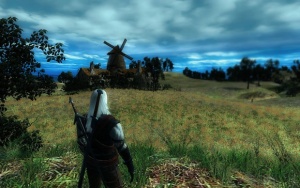 And a Curse and Love and Betrayal

"And a Curse, and Love, and Betrayal" is one of the biggest fan-made adventure modules for "The Witcher". It took the creators three years to finish it. The adventure was released in Polish on 25th January 2011 and it was released in English on 17th April 2011. It was also published in the issue 160 of the French magazine "PC Jeux" on the magazine's DVD.

Geralt is looking for Yennefer. He comes to a small village and gets two contracts: a young woman wants to remove a curse from her lover who turns into a wolf at day and the chief of the village wants to clean up the local gold mine of all the monsters.

The authors of the adventure[edit | edit source]

Thanks to Square Crusaders Team for the possibility to use a few of their models created for their "Requiem for a Witcher" project and for a few loading screens.

To install the adventure double click the file "And_a_curse_and_love_setup".

If you play the box version, make sure that the patch 1.4 or 1.5 is installed (The Witcher Platinum box edition is already patched). Please, do not alter the default installation path chosen by the installer.

To play the adventure: