From Witcher Wiki
(Redirected from Aenyeweddien)
Jump to: navigation, search 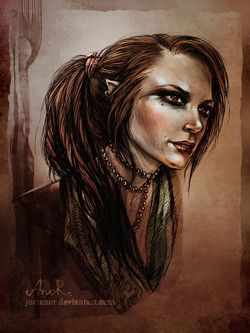 Iskra (or Spark), whose real name was Aenyeweddien or fire child in Elder Speech, was an elf and one of the members of the Rats. She had dark, luxurious hair and huge, bright almond-shaped eyes. She liked to adorn herself with jewelry. She was Giselher's lover and, like all the rats she knew how to kill.

Prior to joining the Rats, she had been shunned by her own people and left to fend for herself. A prospect which meant certain death, had she not found a surrogate family with the Rats. The reasons for her expulsion were never explained.

She was killed, along with the entire gang, with the exception of Ciri, at the hands of Leo Bonhart in Jealousy.

In Polish, "iskra" means "spark or twinkle", so her nickname is merely a simplification of her true name.