The abandoned village of White Orchard lies to the south of the region. Once a settlement known as Hovel, it was home to Volker and Claer. Claer was a close friend to the herbalist Tomira. Its inhabitants were brutally murdered, and as to Claer - she became a noonwraith known as the "Devil by the Well". Geralt finds her diary in one of the houses, helping him lift the curse. Diving underground its well will lead to a small lake northeast of the village.

A few years ago, a group of armed men marched into this settlement. They butchered its inhabitants and burned down their homes. Not a soul has dwelt here since that black and bloody day. 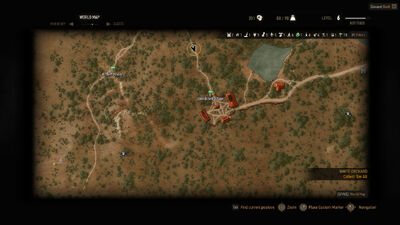