A Grain of Truth 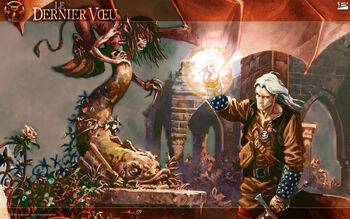 "A Grain of Truth" (Polish: "Ziarno prawdy") is a short story included in The Last Wish collection. It describes how the witcher Geralt met a man in a monster's mask, Nivellen.

The story begins with Geralt looking for a shorter path through a valley when he notices some birds circling a particular area in the nearby forest. There he finds the corpses of a merchant and a young woman, and follows the path from which they had presumably come to a rundown manor surrounded by a high wall and gate. Geralt's horse, Roach, gets anxious and must be calmed with a sign. In the yard, the witcher notices a fountain with a dolphin statue made of white stone, and a remarkable rosebush with indigo flowers.

His attention is soon distracted by the sound of a rushing beast. Shortly thereafter, Geralt comes face to face with the mansion's current owner, Nivellen. More beast than man at first glance, but fully capable of speech. At first Nivellen tries to rush the witcher, stamping and snorting, assuming that his unexpected guest will be frightened away, like the others before him. Geralt, however, is no ordinary guest and is not the least bit frightened by Nivellen's display.

After a moment of awkwardness, Nivellen decides to invite the witcher inside, where they proceed to dine and chat. Nivellen tells Geralt about himself, his father, his grandfather, and the last twelve years that he's spent, cursed. He reveals how it was through his own misdeeds that he came to be cursed (he raped a priestess of Coram Agh Tera) and how he came to even enjoy his state as it does seem permanent. Meanwhile, Geralt listens and slowly draws his own conclusions about his host.

Nivellen explains that since his fate seemed to be straight out of fairy tales, that perhaps other fairy tales contained "a grain of truth". In particular, tales of beautiful young women turning beasts back into men. He relates the story of the succession of women who came to live with him. It only took one to realize that simply living them would not break the curse, but it also took only one to realize that it was not such a terrible arrangement for him or the young women. He treated them like true ladies, requiring nothing from them but their company and they all left richer for their stay. None of them needed to be coerced into bed, either.

Throughout the dinner, Geralt keeps asking his host if they are alone and Nivellen keeps dodging the question. At the end of the dinner, Nivellen escorts Geralt out, unwilling to discuss the latest girl, Vereena, who lives with him. He does mention the dreams he's been having lately, which suggest that his condition might be worsening and the he might someday truly become the monster he currently appears to be. He asks Geralt to do his duty if things go really wrong. The witcher agrees, and leaves.

He does not go far however, choosing to spend the night in the nearby forest. The following day, he returns to the mansion, silver sword in hand, and confronts the bruxa, which is what Vereena turned out to be, in the yard.

A battle ensues, Geralt's forced to be defensive as the creature is almost too fast for him to hit. Things are going quite badly for the witcher when Nivellen suddenly appears from the house and distracts the vampiress, saving Geralt's life. Vereen then turns her attention to Nivellen. It seems that if she is to die, she is intent on taking her lover with her. Geralt finally kills Vereena, saving Nivellen's life but not before Vereena's display of love, mixed with her blood, finally undoes Nivellen's curse.

Geralt leads Nivellen, now a man again, away from the yard and the corpse, answering the man's confused questions to the best of his knowledge.